His Life, His Lessons, and His Legacy

Hundreds and hundreds of people converged on the Klurman Campus of Yeshiva Toras Chaim Toras Emes for the levaya of the much beloved and respected Dr. Abe Chames High School Secular Studies Principal, Rabbi David A. Levine a”h. Hundreds more watched a live stream of the levaya, all bound together by one individual who accomplished so much in a limited amount of time. For over a week before his petira, the high school talmidim voluntarily learned additional sedarim and davened extra tefillos as a zechus for Rabbi Levine. The Yeshiva, the community, and Jews all over the world poured out their hearts, begging Hashem for his refuah shelaima, and thousands mourned his petira on Sunday, February 23, the 23rd of Shevat.

The Yeshiva, the community, and Jews all over the world poured out their hearts, begging Hashem for his refuah shelaima, and thousands mourned his petira on Sunday, February 23, the 23 of Shevat.

What inspired so many people to do so much and feel so connected to a Secular Studies Principal? Why did our Yeshiva, and indeed the entire South Florida community, feel like they suffered such an immeasurable loss? The answer was self-evident in the moving hespeidim at the levaya, fittingly held in the Yeshiva to which Rabbi Levine was so devoted. All those who came to join in this kavod acharon knew the answer as well. Rabbi Levine was not just your average Secular Studies Principal. He was a giant of a man who affected so many people in so many different ways. And while we all mourn our tremendous loss, Rabbi Levine leaves behind a legacy that can inspire us all. 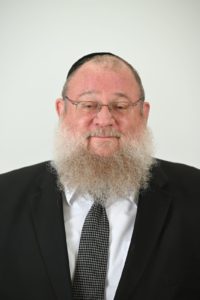 In 2004, after a successful nineteen year career as a Rebbi in Hebrew Academy, Rabbi Levine joined Yeshiva Toras Chaim Toras Emes as the DACHS Secular Studies principal. From his earliest days, he immediately earned the respect of the administration, faculty, parents and students for his extensive knowledge, sense of responsibility, attention to detail and undiluted integrity. His sense of purpose and commitment to the truth pushed not just him, but everyone fortunate enough to come his way, to accomplish more. He always said that he believed in the power of constant growth which enabled him to serve others, and it helped others surpass what they thought was possible. He never looked for excuses, nor did he avail himself of the many valid reasons that could have justified his inability to complete a project or take on a new one. It is said that Hillel obligated the poor to learn Torah, and indeed Rabbi Levine obligates us all to try that much harder and to do that much more every single day.

HaRav Moshe Meiselman, Rosh HaYeshiva of Yeshivas Toras Moshe, was the first to be maspid his close talmid of forty-two years. He spoke of a talmid chacham who was a baal achrayus, a man who took his responsibilities seriously, never shirking away. He bemoaned the loss of a man so faithful and honest  with an unquenchable drive for yashrus. He poignantly described him with the well known tefillah in Birchas Kriyas Shema as someone who is אמת ויציב ונכון וקים וישר ונאמן ואהוב . Rav Meiselman recalled discussing a monetary shaila recently with Nadav, Rabbi Levine’s youngest son. When Rav Meiselman told Nadav that it was mutar and permitted, Nadav’s response was that his father taught him never to be satisfied simply with “mutar” it has to be yosher, 100% straight and honest. Rabbi Meiselman’s prophetic words to Rabbi Levine’s first employer rang true to everyone in the crowd when he emphatically stated that anyone who employs Rabbi Levine will see only nachas and hatzlacha from him.

It is said that Hillel obligated the poor to learn Torah, and indeed Rabbi Levine obligates us all to try that much harder and to do that much more every single day.

Rabbi Dovid Lehrfield, Rav of Young Israel Kehillas Ahavas Shalom followed, and eloquently quoted the Mishna in Pirkei Avos שלשה כתרים הם, כתר תורה וכתר כהונה וכתר מלכות, וכתר שם טוב עולה על גביהן. Who, if not Rabbi Levine epitomized the three crowns of Torah, kehuna, and kingship and had the crown of a good name that eclipsed them all? He portrayed the aristocratic scene on Shabbos of watching Rabbi Levine in his beautiful kapota walk to shul and daven with such sincerity. Rabbi Levine’s son, Nachi, then expounded on his emphasis on tefilla “b’chol dikdukeha” in all its details. Nachi remembered how as a young child, Rabbi Levine helped him calculate how many hours an average person spends davening each year, after which he so brilliantly challenged his son, “Nachi, if you spend this many hours in tefillah, don’t you think you should at least understand what you are saying?” Nachi then asked all the attendees, in the merit of his father, to please consider elevating their own personal tefillos in some meaningful way.

Rabbi Ori Milrod, son-in-law of Rabbi Levine, and Rav of Mivakshei Torah of Baltimore, spoke about the many people he has encountered throughout the years in his own community that credit their lives to Rabbi Levine. Although Rabbi Levine taught many of them over twenty and even thirty years ago, they still feel his hashpa’ah and are still makir tov to him for turning them into true Bnei Torah, and as a result they all treat his son-in-law like royalty. Rabbi Milrod highlighted his sense of achrayus and how he recognized that people learn from your actions, and you must therefore hold yourself to the highest levels of accountability. He fondly recalled how Rabbi Levine would seize any opportunity to gift him with new seforim, how he doted on each grandchild and made every Pesach seder come alive. Rabbi Levine’s grandchildren were the apples of his eye, and they felt and appreciated his special love.

Rabbi Yisroel M. Janowski, Principal of Yeshiva Elementary School, explained how he was always so impressed and inspired by Rabbi Levine’s dikduk b’halacha. He was meticulous with every halacha in shulchan aruch, even keeping the requirements of yoshon thirty years ago in Miami, long before it was popular or easy to do.  Rabbi Janowksi stressed, that all of Rabbi Levine’s many accomplishments, and the beautiful children and talmidim that he raised and guided, are a credit to his dedicated eishes chayil as well, Mrs. Sharon Levine tblc”t who shares his passion and commitment and unfailingly stood by his side for so many years.

Rabbi Mordechai Palgon, Rosh HaYeshiva of YTCTE, then got up and in a broken voice, laced with pain, he addressed the Talmidei HaYeshiva with tears streaming down his face. He emphatically declared how dedicated Rabbi Levine was to each student and each faculty member, and how he literally gave his life and soul to them and the Yeshiva. At the same time, despite having nineteen years of experience as a much loved Rebbi, he was able to smoothly transition into the position of Secular Studies Principal, never once overstepping his boundaries in other areas of the school. This strength and sense of respect is not something that many of us could claim to possess. Rabbi Palgon stressed that when others were stubborn for bad, Rabbi Levine was always stubborn for good. “He was the most beloved, loving, nurturing, softhearted thorn in your side that ever existed.” His secular studies staff, most of whom attended the levaya, loved him, were dedicated to him, and would do anything for him, even if that meant building a wall for the Yeshiva during their summer vacation. They knew he supported them, valued them, and appreciated their talents and contributions to the Yeshiva.

Rabbi Binyomin Luban, Rosh HaYeshiva of YTCTE, movingly described how Rabbi Levine so aptly and uniquely lived in two worlds. His breadth of knowledge in academia was admirable and at the same time he was a true talmid chacham who constantly spent his time learning and growing, deriving immense joy from every new insight and every chiddush he found. The skills and lessons he taught his students with regard to being diligent, punctual and to overcome hardships, are lifelong values that each talmid can, and should use every day in their avodas Hashem. And if they do so it will be an eternal zechus and legacy for Rabbi Levine.

…his impact will live on for generations to come.

Rabbi Ephraim Shapiro, Rav of Shaarey Tefillah, concluded with a moving lesson. He described the 12 precious stones on the choshen of the kohein gadol, each one so beautiful and precious. Yet, Rabbi Shapiro questioned why they were simply named avnei miluim, filling stones. Is the greatest attribute of these priceless gems simply that they fill in the 12 holes on the kohein’s breastplate? HaRav Shmuel Birnbaum zt”l answered, that we learn from here that like these jewels, a person’s value is not based on their intrinsic worth, but rather it is determined by the role they play in filling in where it is needed. Rabbi Levine’s whole life was dedicated to others. He lived for others, cared for others, and davened for others, even when he himself needed tefillos and yeshuos. And now South Florida has lost one of our very own “avnei miluim.”

Indeed, Rabbi David Aharon Levine a”h leaves behind an everlasting legacy. It is a legacy that Rabbi Meiselman described as אמת ויציב ונכון, one of truth, integrity, and faithfulness that is guaranteed to be “וקים”  to endure forever. His hundreds of students, friends, and his beautiful family are now tasked with the responsibility of perpetuating that legacy and living up to the high standards he set. By doing so, his impact will live on for generations to come.