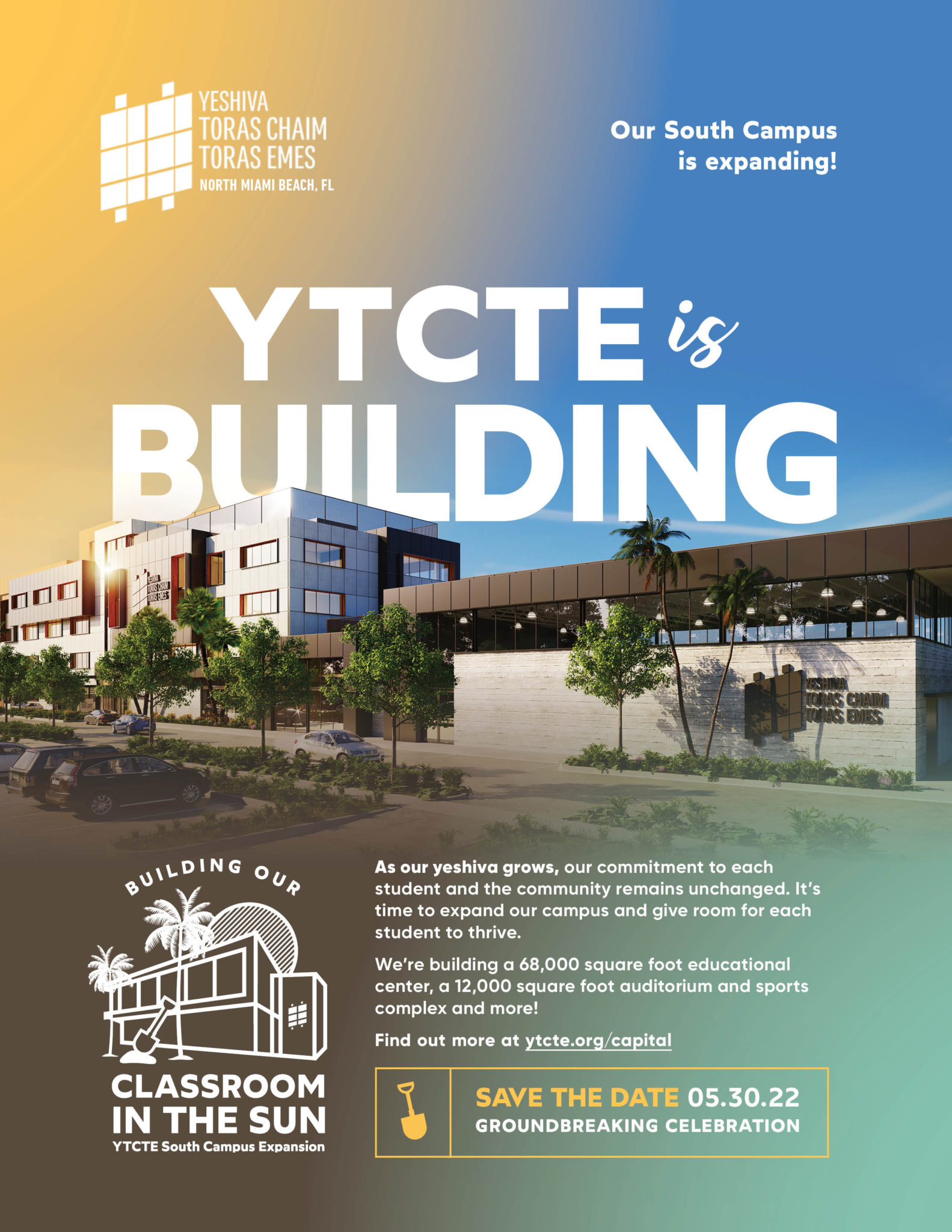 The 80,000 sq ft expansion of the Yeshiva’s South Campus is due to break ground on the 30th of May 2022 and is on its way to making YTCTE one of largest Yeshiva campuses in Florida!

In recent years, the South Florida Jewish community has become a magnet, drawing many young families to move in and settle down. These families are on the lookout for a thriving community with impressive educational options for their children and they are finding it in the South Florida community and at YTCTE.

As one of the largest, most established schools outside of the New York and New Jersey area, Yeshiva Toras Chaim Toras Emes (YTCTE) has earned its reputation as a leader in bridging top-notch Torah chinuch with a high level of secular studies.  In the 38 years since its founding, the Yeshiva has seen thousands of students pass through its doors and go on to build successful lives rooted in yiras shamayim, derech eretz and chesed.

With many new families eager to enroll their children at YTCTE, the Yeshiva’s physical capacity has been stretched to its limits. And with the current student body of 1,200 students expected to reach 2,000 by 2030 – a 63% increase – the available space is just getting tighter.

Which is why the YTCTE Board has now unveiled plans for an 80,000 sq ft expansion of the Yeshiva’s southern grounds. “This expansion,” says Rabbi Nosson Yishaya Schwartz, Director of Institutional Advancement, “Will enable us to have the physical space to provide a top-notch education to every child who wants to grow in their Yiddishkeit.”

Designed by one of Florida’s top architects, Koby Karp, plans are underway for the building of a  state-of-art 4-story Educational Center which will host a 68,000 sq ft Boys Middle School and Elementary School Complex as well as a 12,000 sq ft gymnasium/auditorium.

The expansion will include:

With the announcement of the upcoming groundbreaking event, anticipation is buzzing through the community as parents, students, alumni and staff members will watch a long-awaited dream start to take shape.

“YTCTE is an educational community gem that combines the highest standards of religious, ethical and general studies,” says Mr. Marcos Lapciuc, President of the Board.

“We are now in the midst of a history-making campaign that will forever change the face of Jewish Education in South Florida and in America!”

About YTCTE: YTCTE was one of the first Jewish schools to open its doors in South Florida. For close to four decades, the Yeshiva has been fulfilling the community’s needs for excellence in both Kodesh and Secular education. Having developed and implemented cutting edge academic programming in an environment filled with care. YTCTE has become one of the largest, most sophisticated Yeshivos of its class in the Southeastern United States. Today, it is home to over 1,200 students.