Menu
Portal
Donate
Visit
Menu
Back to all Updates

A Kiddush Hashem In The Sun

Thank you for participating in the YTCTE South Campus Expansion Groundbreaking event! 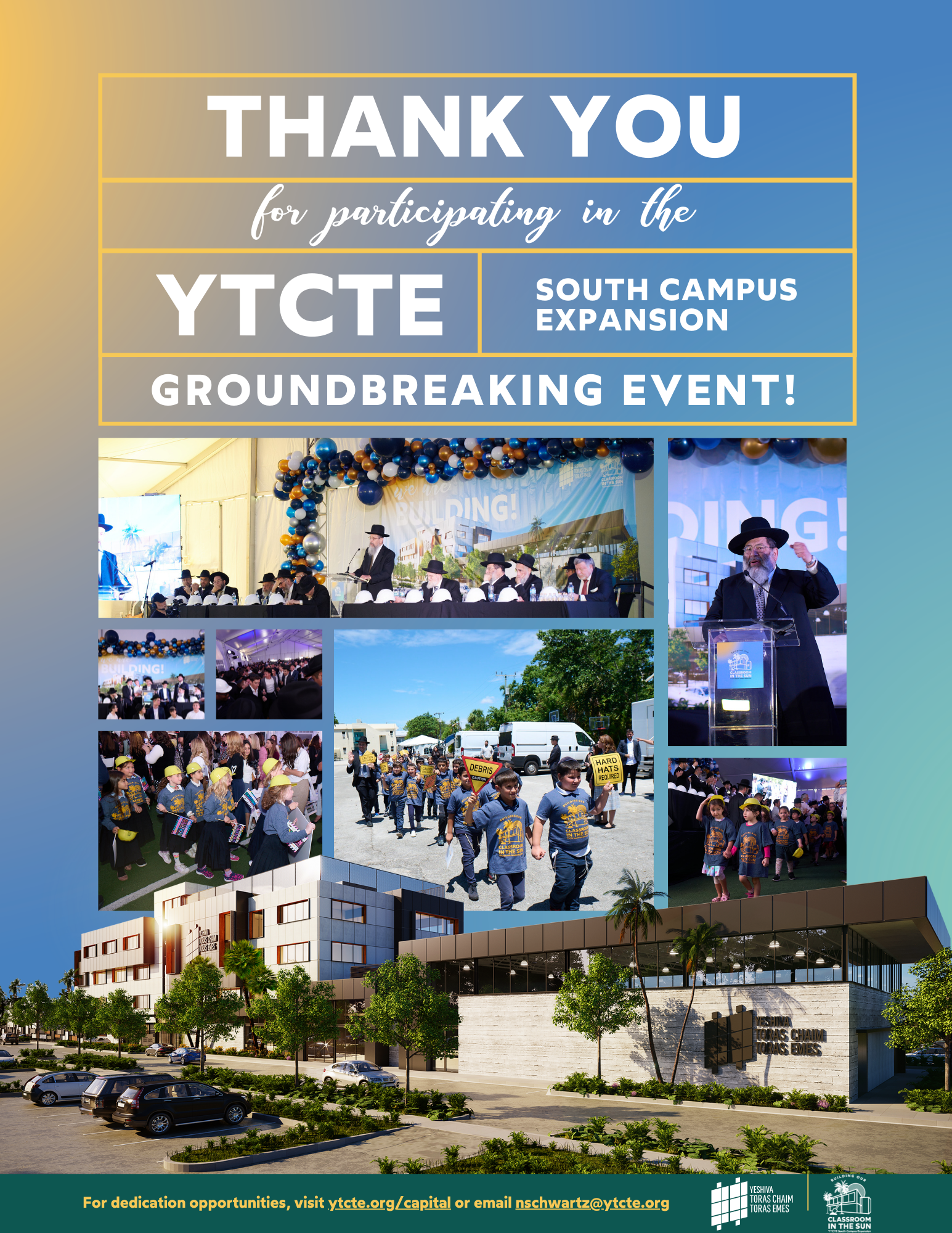 The South Florida Torah community witnessed an historic moment as over 2,000 Rabbanim, Mechanchim, teachers, parents, students and friends of Yeshiva Toras Chaim Toras Emes came together to celebrate the first concrete steps of its South Campus Expansion at the much-anticipated Groundbreaking Event on Monday, May 30.

YTCTE, one of the largest, most established Yeshivos outside of the New York/New Jersey area, has been growing exponentially with a current enrollment of over 1,200 talmidim and talmidos from preschool through Bais Medrash. However, the Yeshiva’s physical capacity has been stretched to its limits and plans were developed to build a new 80,000 square foot educational center and auditorium/sports complex. On May 30, a standing-room-only crowd came to North Miami Beach to share the excitement and support the Yeshiva’s growth as they broke ground on this exciting, and much needed project in what was a tremendous display of Kavod HaTorah.

The participants were honored to be joined by HaRav Dovid Harris shlita and HaRav Akiva Grunblatt shlita, Roshei HaYeshiva of Yeshiva Chofetz Chaim and HaRav Yaakov Bender, Rosh HaYeshiva of Yeshiva Darchei Torah who flew in from New York to join the simcha. Everyone was moved when the seventh grade talmidim of the Rohr Middle School began the event by making a siyum on Seder Moed in honor of the occasion and in memory of Mr. Isaac Nahon a”h, the father of one of their classmates, ensuring that  the foundation of this new building will begin with Torah learning. The Groundbreaking concluded with the impressive YTCTE Student March where over 650 elementary and preschool students paraded through the crowd accompanied by the festive singing of Uri Davidi. As the ceremonial groundbreaking took place, with shovels and hard hats, the Talmidei HaYeshiva and guests broke out into spirited dancing and singing, truly celebrating this monumental milestone.

For more information about this campaign, please visit ytcte.org/capital or email [email protected].